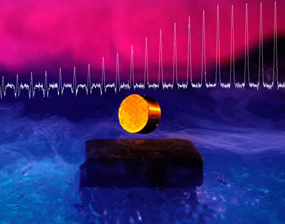 Almost all materials present on Earth, whether synthetic or naturally occurring, contain elements which have an NMR-active isotope present.  These nuclei have tiny magnetic moments that respond to the local magnetic and electric fields in their environment.  These nuclear moments are much smaller than any electronic moments, and can resonate at radiofrequencies in modest magnetic fields.  This is the principle of magnetic resonance imaging (MRI) machines, which probe the response of the hydrogen nuclei present in the body.  Because the harmless radiofrequencies have such low energies, they do not perturb the electrons in the surrounding atoms.  However, the nuclei are very sensitive to their environment, so by measuring the nuclear spin resonances, one learns much about the surrounding atoms. 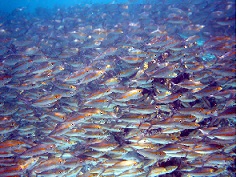 There are numerous cases in the natural world where the collective behavior of a group differs dramatically from that of the individual particles.  A prime example is the flocking of birds, which can not be understood by investigating a single bird.    These beautiful and unexpected phenomena are known as emergent behavior, and play a role in all realms of science, from the behavior of animals and people, to the quantum mechanical realm of the electron.  In some cases electrons in condensed matter exhibit behavior typical of individual particles, but they can also do unexpected and surprising things.   Superconductivity, for example, arises because of interactions between electrons that enables them to enter into a new quantum phase of matter.    Much of our research is focused on using NMR to investigate these new types of quantum behavior of electrons.